Film Industry Ties for 3rd Most Favorable Among 17 Industries Included in The 2020 Garrity Perception Survey.

Albuquerque, NM. – New Mexico residents have a very favorable opinion of the Film and Motion Picture Industry according to the 2020 Garrity Perception Survey (GPS). Among the 17 industries surveyed, the film and motion picture industry is the third most favorable in the state, tied with New Mexico community colleges. The scientific survey among New Mexico residents was conducted in late January 2020.

Breaking Bad, No Country for Old Men and The Avengers are all productions that feature New Mexico in their credits and is one reason why the industry has such a favorable opinion among New Mexicans,” said Tom Garrity; President and CEO of The Garrity Group Public Relations. “According to NMFilm.com the industry has generated in excess of $1.4 billion into the New Mexico economy since 2015. In addition to economic impact, it provides a sense of pride when we see the state’s unique landscape featured on the big screen.” “It is not a mythical industry that happens somewhere else, it actually happens here on our streets, in our homes and employing our own local businesses in our state,” says Amber Dodson, Director of the New Mexico Film Office. “We are film friendly; this is an asset we have here when productions come to shoot here they are talking to, in general, to residents and business owners who have worked with the film industry and they think it is good for the economy, and it is. So many jobs are produced by the industry. Take for example, a feature film filmed here last year, Netflix’s Army of the Dead. They did most of the photography and production in Albuquerque and employed 501 New Mexico crew members, these are high paying jobs, lifelong careers as well as 2,000 background actors. This is a film friendly state because so many residents are employed or benefit from it.” Residents who are likely to have a favorable impression of the film and motion picture industry include people who have been residents of the state for less than eight years, a college graduate and over the age of 65 years. 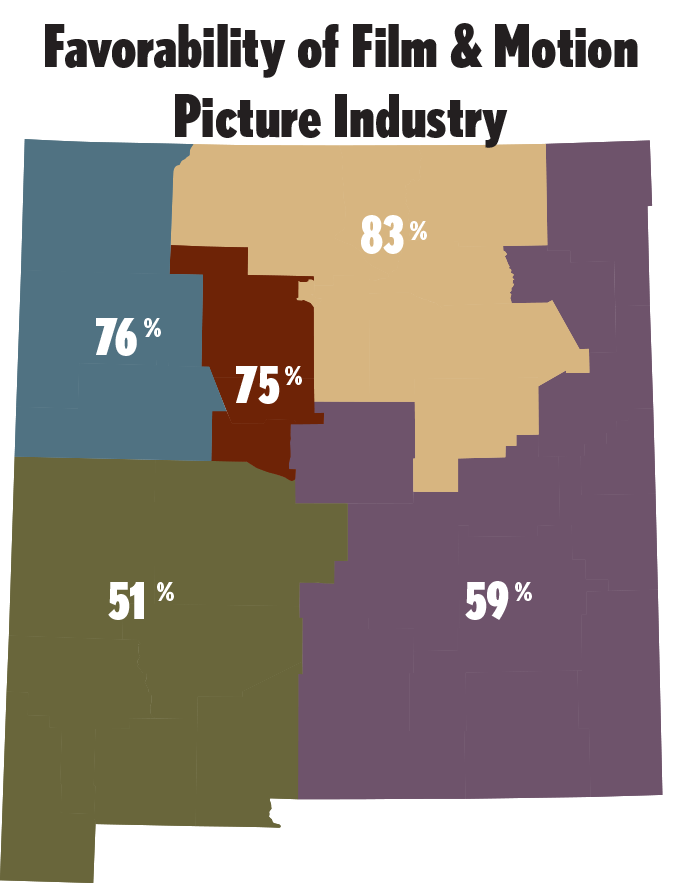 Listen to the interview with Amber Dodson by clicking here.