When it comes to who New Mexico residents trust, blood is thicker than water. We’re not able to choose our family but we sure do trust them. Residents were asked to rate the trustworthiness of various people using a five-point scale where five is completely trust and one is completely distrust. The large majority (76%) of New Mexicans view their family members or relatives as being trustworthy. Of this group, women were more likely to trust family members and relatives (81%) then men (61%).
Teachers are trusted among 69 percent of New Mexico residents. Trust of teachers increases with the level of attained education. Among college graduates, 71 percent trust teachers, compared with 68% of high school graduates. Doctors are trusted by 66 percent of residents. In January, months before New Mexico’s first reported COVID-19 case, doctors had the highest level of trust among residents living in the Northwest (84%) and North Central (72%) parts of the state. Northwest New Mexico was harder hit by COVID-19 than any other part of the state. Also, 75 percent of residents 65 years or older trust doctors, compared to 67 percent of residents 18-34 years old. Rounding out the most trusted New Mexicans, 61 percent of residents trust scientists, and 58 percent view police officers as being trustworthy. Just over half (52%) of the state’s residents rate pastors, priests or other religious leaders as being trustworthy, which is a decline from 62 percent observed in 2017. On the flip side of the “red line,” a host of other people and professions have their work cut out. Those with trust below 50 percent often have to share one to two points defending their profession before proactively sharing something positive. Less than half of New Mexico residents view accountants (45%), judges (41%), the ordinary man or woman (40%), and business owners/executives (38%) as trustworthy. However, it should be noted that 26 percent view judges as untrustworthy, and 19 percent say the ordinary man or woman is untrustworthy. One in three residents view journalists as being trustworthy, while 33 percent distrust journalists and another 30 percent have mixed feelings. Residents living in New Mexico for more than 20 years have a higher level of trust (35%) for reporters than do residents who have been here for fewer than eight years (20%). More women (41%) than men (25%) trust journalists. Democrats (40%) and independent voters (30%) trust journalists more than Republicans (28%). When you look at trust by region, the numbers fluctuate. For example, in 2014 only 8 percent of residents living in the northwest region trusted journalists, compared to 57 percent who did not trust reporters and editors. In 2017, only 14 percent of residents on the east side of the state trusted journalists compared to 53 percent who distrusted the profession (read Closer Look: Newspapers on page 14). New Mexico residents are more likely to say they distrust the following people than they are to trust them: federal government officials (36% distrust, 29% trust); state government officials (35% distrust, 31% trust); lawyers (34% distrust, 29% trust); and advertising executives (40% distrust, 20% trust). We will take a closer look at the trust of state and federal government officials on page 11. 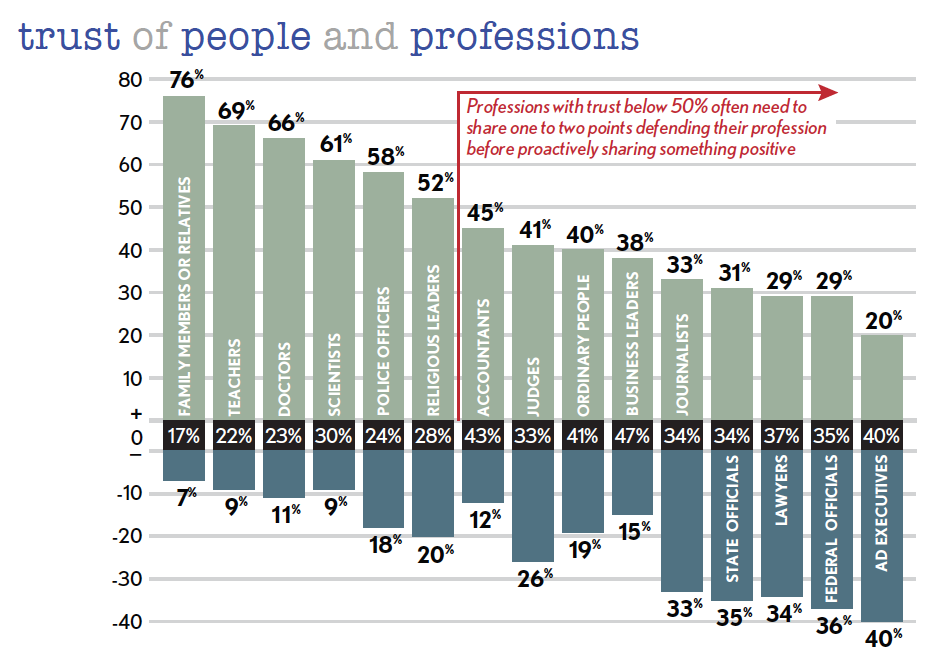 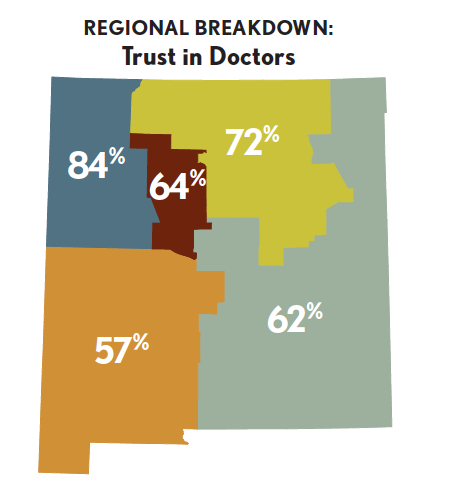