“We have a huge positive impact on the state’s economy, providing good-paying jobs for thousands of New Mexicans, and supporting a lot of small businesses through subcontracts and procurement.”

“The Laboratory, its operator Triad LLC, and its employees are serious in their commitment to play a positive role in the New Mexico community, and as director of our Community Partnerships Office, I help oversee that work,” says Kathy Keith. “People appreciate that Los Alamos and Sandia National Laboratories do important work on behalf of the nation. As large organizations, we have a huge positive impact on the state’s economy, providing good-paying jobs for thousands of New Mexicans, and supporting a lot of small businesses through subcontracts and procurement. Los Alamos spent $396 million with New Mexico businesses last year. Of that, $289 million was with small businesses.”

Los Alamos Laboratory Contributes $3 Billion a Year to the State’s Economy. An independent economic impact analysis has found that Los Alamos National Laboratory is responsible for creating 24,169 jobs in New Mexico while contributing $3.1 billion a year—much of it in out-of-state dollars—to the New Mexico economy (https://www.lanl.gov/community/economic/index.php).

Sandia National Laboratory now has more than 14,000 employees in Albuquerque alone. According to the Albuquerque Journal, the Sandia Laboratory contributed than $3.7 billion dollars into New Mexico’s economy, with $2.1 billion going straight to payroll (https://www.sandia.gov/working_with_sandia/economic_impact/). 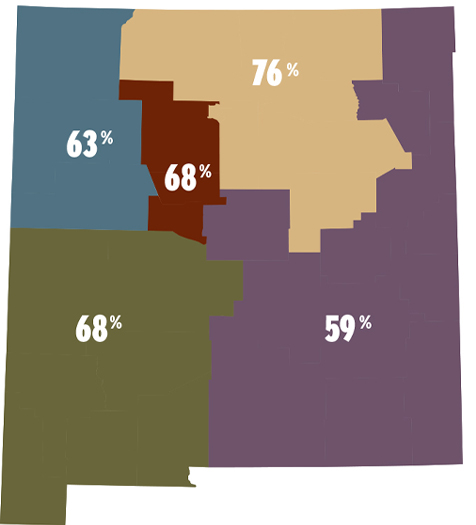 Geographically, Albuquerque residents, where Sandia National Laboratories is located, have a high favorability of 68 percent. Eastern New Mexico residents have a favorability of only 59 percent.