Albuquerque, NM. – New Mexico residents have a favorable opinion of the wind and solar industry according to the 2020 Garrity Perception Survey (GPS). Among the 17 industries surveyed, the renewable energy industry is the seventh most favorable industry in the state. The scientific survey among New Mexico residents was conducted in late January 2020. “The renewable energy industry is favorably positioning New Mexico to be a significant player in the generation and transmission of clean energy due in large part to New Mexico’s great assets in plentiful and quality wind and sunshine.” said Tom Garrity, President and CEO of The Garrity Group Public Relations. “The move to renewables is also driven by the 2019 Energy Transition Act that establishes a pathway for a low-carbon energy transition away from coal.”
According to the State of New Mexico, the Energy Transition Act sets a statewide renewable energy standard of 50 percent by 2030 for New Mexico investor-owned utilities and rural electric cooperatives and a goal of 80 percent by 2040, in addition to setting zero-carbon resources standards for investor-owned utilities by 2045 and rural electric cooperatives by 2050. New Mexico Renewable Energy Transmission Authority’s Executive Director Fernando Martinez shared some insights about the increased favorability of the industry during a recent interview with Tom Garrity. “There are economic and environmental reasons for increased favorability of the industry. Western energy policies have changed rapidly in the last few years. There are energy policies, meant to meet environmental benefits that are going to realized in NM and the surrounding states, but it is also great economics that are driving the wind and solar industry right now. Because wind and solar are now cheaper than new gas and new coal and that is even without the incentives of investment tax credits and production tax credits. We can say that wind and solar are now a large part of the new energy markets based solely on low cost. And we expect by early 2030s that new wind and solar will be cheaper than existing gas.” New Mexican’s favorability of the renewable energy industry has been consistently favorable, hovering right around 60 percent since the GPS started in 2011. Residents who are likely to have a favorable impression of the renewable energy industry includes voters who are registered as a democrat, have a graduate degree, household income of $40,000-$79,99 each year and between 50-64 years of age. Geographically, residents in the North Central region are the most favorable of wind and solar industry. New Mexicans living in Albuquerque and the Las Cruces area are also favorable of the industry. 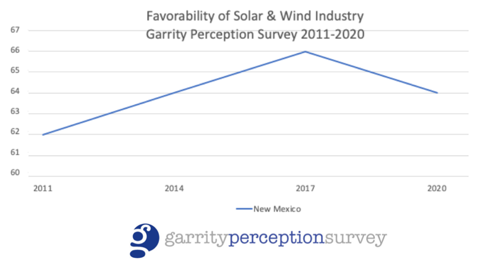 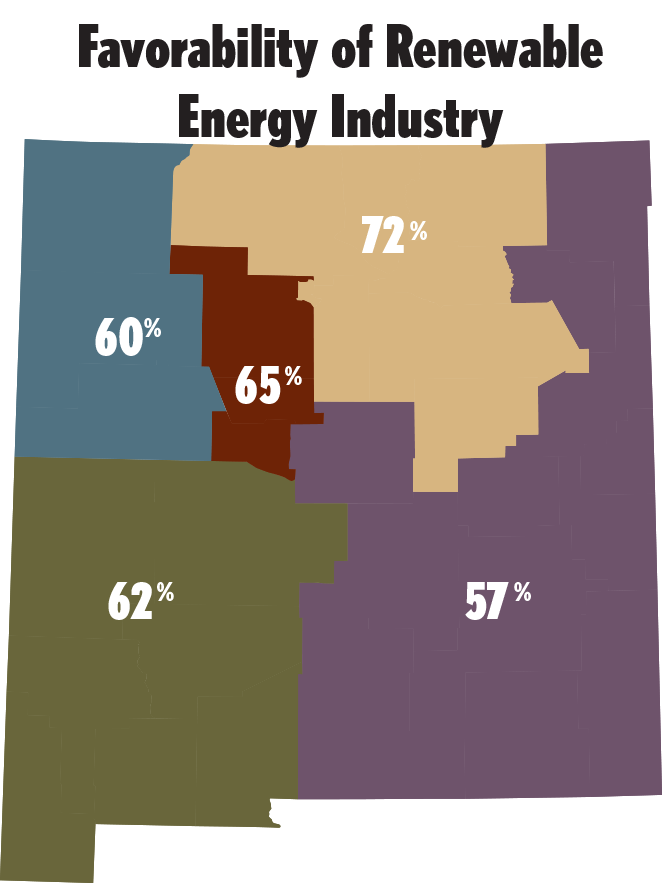