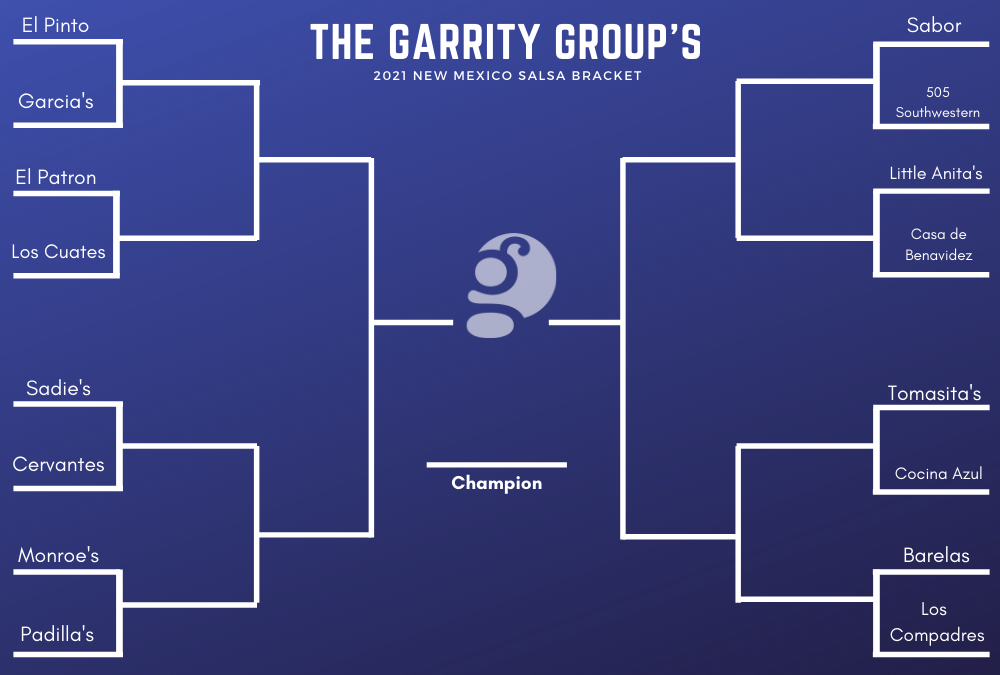 Albuquerque, N.M. – El Pinto has been named as the winner of the 2021 New Mexico Salsa taste-off! Dubbed “Salsa Madness”, the month-long contest, hosted by The Garrity Group Public Relations. Matched sixteen Albuquerque-area salsas against one another as a way to celebrate New Mexico cuisine and support local businesses during this unprecedented time.

“We are lucky to live in a city that has so many great salsas to choose from,” said Andie Mirabal, Director of Public Relations at The Garrity Group. “However, with a lot of great options, came a lot of difficult decisions. It was a fun way to highlight one of the state’s most popular appetizers.”

Participants were selected for Salsa Madness, based on recommendations in city-wide social media groups, and those frequented by The Garrity Group team members. Competitors were matched based on similar tastes of salsa, including production style, level of heat and product consistency.

The competition was conducted as a blind taste-test and featured only red salsas. One, standard style of corn chip was used by the judges, when tasting the salsas.

The “final four” matched Casa de Benavidez and Los Compadres on one side of the bracket and Monroe’s against El Pinto on the other. Moving on to the final round, was Casa de Benavidez and El Pinto. El Pinto won The Garrity Group over with their thick consistency, not-too-spicy level of heat and freshness of ingredients.

“My brother and I set out to capture the simple freshness of our grandmother’s recipe and share it with the nation. Our salsa and chile, available in your local store, achieves that goal,” said John Thomas, Owner of El Pinto.

The bracket featured 16 local restaurants in a blind, taste-test competition. The participants include:

“March is a favorite month in our office,” said Tom Garrity, President of The Garrity Group. “We are always excited to find new ways to engage in friendly competition. It is even better when we have a chance to showcase other Albuquerque small businesses that help to make New Mexico so great.”

Based in Albuquerque and serving New Mexico clients for 24 years, The Garrity Group Public Relations firm helps small businesses to be heard and large organizations to be understood. More information about The Garrity Group team and services are available by visiting www.garritypr.com.